The Pinata is a special monster that will only appear after a player spawns it. Doing so will create an announcement for the world, so that everyone know they can participate. A player needs to be fully naked in order to attack it. Killing the Pinata will give every participant a drop, ranging from gear boxes and Scratchcards up to OP Keys and Millionaire Boxes. Starting players should try to kill as many Pinata's as they can.

Groudon Beast is a beginner mass boss that spawns every 30 minutes. You can quickly find it at ::bossevent. Groudon Beast has pretty basic drops like Red Keys, Mystery Boxes and Legendary Mystery Boxes, but there's also a chance to gain 1-3 OP Keys or a Diamond Chest. 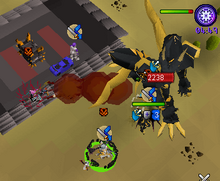 This 'Minigame' is a very consistent moneymaking method. You can read a more detailed explanation on the Light and Dark Minigame page, but in short: Help other players kill the big bosses that spawn in the center every 5 minutes, and either sell the keys they drop to other players (price at the moment of writing this article: 150k-300k) or open the Chest of Hope for a chance of something more valuable.

Starter Slayer could be very profitable and fun to do every once in a while. There are currently only 2 slayer Masters worth slaying for, Vanakka being the beginner Master. The way slayer is profitable is for the Super Slayer Boxes that you could get. Each slain monster has a 1/200 chance to drop one, which can then be opened for a chance at something valuable, or sold for a steady amount (price at the moment of writing this article: 200k-400k). It is recommended to have atleast a Jax Lantern or better to do this.

Voting is the main way players can promote their server without much trouble. This can be done every 12 hours. Voting for StargazePS rewards you with Voting Points, which should be spent on Voting Scrolls. These can then be sold for a steady amount of cash (price at the moment of writing this article: 200k-400k)

Leeching mass bosses is a very common way new players will get some starter cash. You don't need much gear or items to start with this, but having all of the following really helps:

The following Mass Bosses are very popular and will net you a small amount of consistant money, but a small chance of getting a very expensive drop. 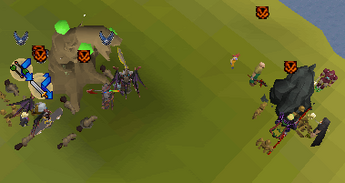 Using alternative accounts to get some extra money is allowed on this server, but only limited (make sure to read the rules). You can have up to 4 different clients open doing AFK activities: 3 are done in ::afkzone east of home, the fourth is at ::broly. Doing this will reward players with AFK Tickets to spend at the AFK Store, as well as a chance to gain other valuables.

Community content is available under CC-BY-SA unless otherwise noted.
Advertisement